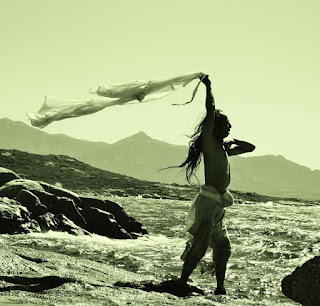 * There will also be an interview between Atsushi and UNFIX director Paul Michael Henry.
Film -Mediterranean -  ( 2020 / France/  38'00  )
Directer  Michel Tabet
Butoh Atsushi Takenouchi
Photo Georges Karam
Music  Laurant Depaepe and Hiroko Komiya
This film is an Essay on Butoh-Dance-Documentary, filmed on Corsica island by film director Michel Tabet and photo shoot by photographer Georges Karam. Danced with hard wind, waves and rocky sea-side that sea made the refugees' ships sink. The ruined villages, churches and factories make us feel as if the time has stopped. The megalithic mountainous area shaped the earth's breath. Old trees sleep with an ancient memory. Atsushi continued dancing and dancing.
*Watching is free, but we are kindly asking for donations to support the filmmakers and their chosen charities (info below). Donations can be made HERE, and the suggested amount is €5. If you can pay more it will be greatly appreciated by Atsushi, Michel and the aid workers in Lebanon and Fukushiima they are supporting. UNFIX will recieve no money from this event.

I have been filming Atsushi Takenouchi, a Japanese dancer, for 20 years. I am interested in his universe, which explores the relationship between human body and its environment and draws its inspiration from archaic cultures. The Butoh dance, which Atsushi practices, emerged in Japan in the 1960s, in response to the social and political upheavals that followed the end of the Second World War. Since then, this artistic practice has spread in as many ways as there are dancers.

Inspired by Shintoism and shamanism, Atsushi Takenouchi has developed a butoh practice that represents communication between the natural, social and technological forces that shape the body and human consciousness. Through his butoh he explores the physical and mental potential of humans in relation to their environment.

Recently, we decided to make a 40-minute film at the crossroads between video-dance and documentary. The project aims to be a poetic and sensory exploration of the ethical and aesthetical concerns of our time. We have chosen the Mediterranean as a space for this experimentation. This sea, a source of culture, civilization and exchange, is marked by major human and ecological crises. We want to evoke these tensions, but also to create images that remind us of the power of that sea and its primary beauty.

Michel and Atsushi will split donation between two causes, one in Lebanon and one In Japan:

“Following the explosion of Beirut, we also would like to support Baytna Baytak association which is involved in securing houses and fighting covid-19 among the individuals and families that were affected by the blast: https://baytnabaytak.com/” (Michel Tabet).

“The situation in Fukushima is still one of great hardship (following the nuclear reactor disaster in 2011), with radiation exposure and the problem of covid-19 on top of it. The government is trying to forget the problem of radiation exposure in Fukushima, using the situation of the covid disaster as an excuse. The situation for children is now more serious. 8 years ago we danced a requiem near the site with in collaboration with the below Fukushima Children’s Fund. Since then we have continued to work with them. We would really like to support even with a little amount these children in Fukushima: https://fukushimachildrensfund.org/english/about/?fbclid=IwAR2GHrOfbQxKh0pbYiOfTpEnX2xFn1_LPqY2cMLi0dY2E2bpKIcuIL4224s.” (Atsushi Takenouchi).

You can DONATE HERE.
(by paypal to donations MEDITERRANEAN UNFIX)
THANK YOU // THANKS
投稿者 Globe JINEN 時刻: 18:28